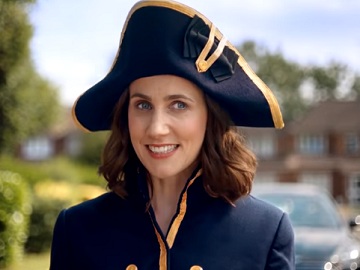 Admiral has launched a new advert to promote its MultiCover Insurance Policy, which insures your home and all the cars in your household on one policy for a guaranteed lower price against Admiral single policies.

The 30-second spot, dubbed “Inspiration”, reveals where the insurance company took inspiration from to create this policy by featuring The Admiral and two men in a seemingly peaceful neighborhood for inspiration. As they watch several cars entering at the same time the garage built under the same roof with the drivers’ houses, they come up with the idea of “one under the same roof”, meaning – in terms of insurance – “your home and car insurance on one policy”, with just one renewal date and a “guaranteed lower price”.

“We’ll call this MultiCover.” – The Admiral says at the end of the spot.

The Admiral, the new face of the motor insurance giant since the beginning of 2016, is portrayed by Lucy Barker, who is also known for her roles in Loser’s Anonymous (2008), When Evil Calls (2006) and Beyond the Rave (2008).