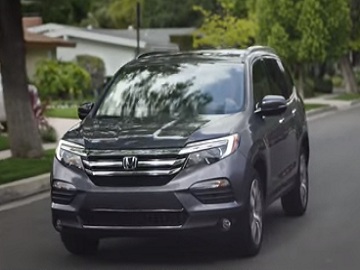 Honda showcases the 2018 Honda Pilot Touring Elite and some of its standard features in a new commercial, highlighting that Bluetooth streaming audio and a multi-angle rearview camera are just two of the many features that come standard on every Honda Pilot.

The 30-second spot, titled “A Medley of Standard Features”, stars a married couple talking about their passion for music while on screen they are seen getting ready to go to a concert together with their kids. “Music’s always been a big part of our lives. It’s actually what brought us together. Music isn’t our sole focus anymore, but it’s still important to us.” – they are heard saying while on screen the mother is seen putting on music via the Bluetooth streaming audio in the car and their kids putting on headphones to listen to the music they like. “So maybe we’re not exactly where we thought we’d be twenty years ago, but that’s ok. Because where we ended up is a million times better.” – the two parents also say. When they arrive at the destination, the man uses the multi-angle rearview camera to park the car before they all enter a building where it turns out it’s where the kids hold a concert, not the parents.

As the spot ends, the man and his wife are seen enjoying their kids’ rock performance from the backstage.