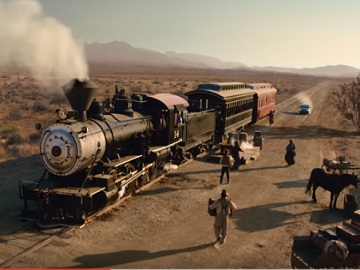 “What does it take to impress history’s biggest naysayer?” Toyota gives you the answer in a hilarious new ad.

The 30-second spot features some of the most important inventions in the world and two men in a Prius Prime, representative for the respective periods, commenting them. “The wheel? That will never work!”, “Electricity? That will never do much!”, “A train? That will never go anywhere!” – says the passenger, who seems to be the biggest naysayer, to the driver.

The spot ends with a contemporary naysayer, giving his opinion on electric hybrid. “Electric hybrid, huh? That will
never…” – starts saying the man, stopping though when the driver shows him the energy monitor.

Described as Toyota’s “most advanced hybrid yet” and “the most efficient car in its class, with an EPA-estimated
133 MPGe”, the all-new Prius Prime features cutting-edge, lightweight materials and proven hybrid
technology that enhance performance while maximizing and redefining efficiency.